“B” is for Book: How fiction has influenced my Spiritual Path

As I look back over the course of events that have shaped my Path, I must pay tribute to certain authors for their visions of what magic looks like. Even though these views may be “imaginary,” they point directly to a rich source of inspiration for my magical life: imagination.

If you are like me, you probably have a number of books, comics and movies that bring sparks of creativity to your magical practice(s). Of course, while I certainly wish my library looked like the above, it’s really this:

Besides cartoons, one of my earliest recollections of a magical story involved Half Magic by Edward Eager. The story tells of the adventures of four siblings who find a magical coin that grants wishes, but generally only half a wish. For example, a wish to visit a desert island becomes a thirsty trek into the desert. As you can guess, such a wishing technique causes all sorts of trouble for our intrepid heroes, but it taught me a valuable lesson early on: be careful what you wish for; it might come true, but not in the way you expect. SPOILER: yes, the children do eventually discover they can receive the full wish by wishing twice as hard.

While I did love that novel, it wasn’t until I began reading Susan Cooper’s The Dark is Rising in grade school that I saw how fiction was coloring my thoughts about the Universe and my place in it. I remember that my sixth-grade teacher was using the series as part of her thesis for her Master’s work. Back then, I didn’t exactly know what a thesis was, but it was clear that she had connected to some part of the work, some aspect which made a huge impression. Over the course of the fall and spring, the class took turns reading that particular novel, which is part of a larger series. I could literally see myself as Will Stanton, an average boy who discovers a most extraordinary part of himself, one that was previously hidden. He is transformed by the magical events surrounding him, encouraged by his teacher and mentor, Merriman Lyon, the Merlin of old. While I have always had a sense of being different, I had been given a vision of my future self in the pages of a book, and it was at this juncture that my spiritual quest truly began.

Comics, or as we know them now, graphic novels, also played a major role in shaping my personal cosmology. Neil Gaiman’s The Sandman, and a spin-off title, Lucifer, delve deep into the collective unconscious, bringing together characters, beings and even Deities from many cultures to share incredible adventures. He opens up a world in which vast concepts like Death and Desire are personified using current cultural references, and the mind of God can be cracked open by a diabolical, self-deified rogue. My world kept getting stranger, and I was the better for it.

There was even a gay role model in my favorite genre: Herald-Mage Vanyel Ashkevron from the Valdemar series by Mercedes Lackey. She explored prejudice towards the expression of love between two men, concepts with which I was already grappling, with compassion and hope. The series spans lifetimes and includes Ancestor work, which gave me the courage to ease into this as my studies of shamanism commenced. I also felt as though my own personal story was being told.

And while I have harbored a life-long fascination with the Elements (Avatar: The Last Airbender, anyone?), Roger Zelazny conjured forth the deep interplay between Dark and Light, Order and Chaos via his Amber novels. I talk about this exchange in my last post. In the reconciliation of duality, that dance between Yin and Yang, life and magic emerge. Zelazny’s portrayal of reality as frequencies of the waves emerging from Amber and the Courts of Chaos was nothing short of mind-blowing for me. When I finally experienced this in medicine trance, I was prepared for how it would feel.

Yes, I am eternally grateful for the many authors who taught me the occult arts and sciences over the years: Starhawk, Yronwode, Coyle, Penczak. However, I am truly indebted to those who’s worked fired my imagination from my earliest years. Thank you to my Brother Initiate, Chase, for sharing a love of fiction with me. You brought back many treasures for me during our chat today.

Who’s work inspired or continues to inspire you?

What visions were brought to vivid life in your mind’s eye?

“A” is for Sacred Art 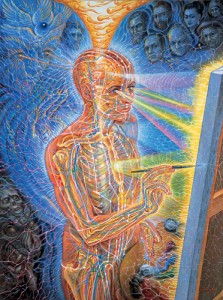 Artist John A. Kohan once wrote:

Sacred Art has been pushed to the margins of contemporary culture.

He goes on to say that he is on a journey to recover his “lost way of looking.” Reading this, I found myself wondering: is he right? At first, my response was an emphatic “No way! There’s plenty of sacred art out there. I saw so much at Burning Man, for crying out loud!” But as I continued to chew on it, I thought about how much goes unnoticed about how beautiful the natural world is. If that’s true, can a culture driven by greed and fear even imagine what constitutes as sacred art?

From our earliest beginnings, people felt driven to express something greater than themselves through art. Cave paintings, pottery and sculpture were only some of the tools used to give form to the numinous. One might say that to the ancients, there was no separation of the sacred from art. Many cultures also embraced the techniques of body modification, especially tattooing. The body itself became the “canvas” on which to shape deeply held spiritual beliefs. A living, breathing testament to the power of the sacred in our lives.

Then there’s art which stands the test of time: architecture. Pyramids from various cultures still capture our imaginations today. Even Notre Dame, while still quite young in comparison, recently celebrated 850 years of existence. Could the original builders even conceive that their works would live on and become inspiration for countless generations?

For me, art has been about the ability to look at something and see more than what is really there. Anyone else remember that line from the movie Xanadu? No?! An elusive quality that only my eyes, filtered through my memories and my subconscious, can render. My partner and I both love to visit and stare out at the ocean, but I know that we both see different things. Not to say that one is better than the other, just different. I believe he once told me that he connects to the memories, both beautiful and horrific, of living so long in San Francisco. For him, the ocean reminds him about how far he has come, and how many we lost along the way. I see Life, the cradle from whence we all sprang. It surrounds us, holds us close and connects us beyond boundaries of space and time.

As usual, it comes down to intention. What does the artist see? What qualities in the subject are yearning for expression? What does the viewer see, for that is just as important as the artist’s vision. I would consider art developed for advertising as radically different from that which can depict Raven as the messenger of the Void. Sure, they can both evoke something within me, but one goes much deeper than the other. I will sit with the latter example longer because I have much more to contemplate from a piece made with deeper intention. When intention is deep, so too is the wellspring of creativity. With the piece at the top of this post by Alex Grey, did you see a man standing in front of his canvas, contemplating the next stroke of the brush, or did you see a channel for the Godhead who is preparing to communicate a profound spiritual lesson on behalf of the Ancestors?

Perhaps Mr. Kohan is right about the margins. This isn’t exactly news to someone who is used to living on the fringe in any case. I do, however, choose to shift my perspective slightly. If sacred art is not currently held as a core value of contemporary culture, if it stands on the edges, it is protecting us like silent sentinels. If we intentionally choose to look away from the self-absorbed, “now trending” ideals of modern society, we will see the guardians that have been placed on the outer edges. They will call to us, desiring to open to us as gateways to transcend ourselves and the ennui.

Meditations on Art and Life

Musings about life, spiritualities, and witchcraft

Life in the presence

The random posts of Violet Flammel

The Cave of Night

Thoughts of an independent traveler through life

A Creative Monkey On How To Find Your Path In Life.