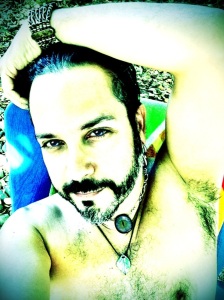 My name is Ravenmoon. I am a modern day mystic, walking in balance between the paths of the shaman and the sacred intimate. I currently call Sacramento, CA my home and am in a loving partnership with two beautiful men.

My spiritual journey began at an early age. Catholicism, the religion I grew up with, gave me my initial connection to something larger than myself. It provided me with a framework through which to understand and interact with the ‘imaginary’ beings that I could sense. Not that I could see them, but I knew that they were there.

While in college, I began to explore alternative forms of spirituality at the suggestion of my mother. Long fascinated with magic, I began to study nature-based faiths. At the same time, I came to understand that I loved the sexy earthiness of men. Coming out, and discovering myself for the first time, led me to the Radical Faeries.

The Faeries taught me many things about my budding sexual and spiritual identities. Several Faerie friends pointed me in the direction of the Body Electric School, which opened my eyes to the intersection of eros and spirit. Thus would begin a lifelong journey exploring boundaries as an Ecstatic and Sacred Intimate. It was during this time that I also studied massage therapy, which would become an integral part of my path.

I began my formal training in shamanism when a chance encounter with a childhood friend brought me to the Unnamed Path, an emerging shamanic tradition for Men Who Love Men. Starting with the podcasts, and quickly moving to working with a Teacher, I soon found that this tradition would encompass all that I had learned, fusing an eclectic collection of beliefs into a cohesive whole.

Meditations on Art and Life

Musings about life, spiritualities, and witchcraft

Life in the presence

The random posts of Violet Flammel

The Cave of Night

Thoughts of an independent traveler through life

A Creative Monkey On How To Find Your Path In Life.